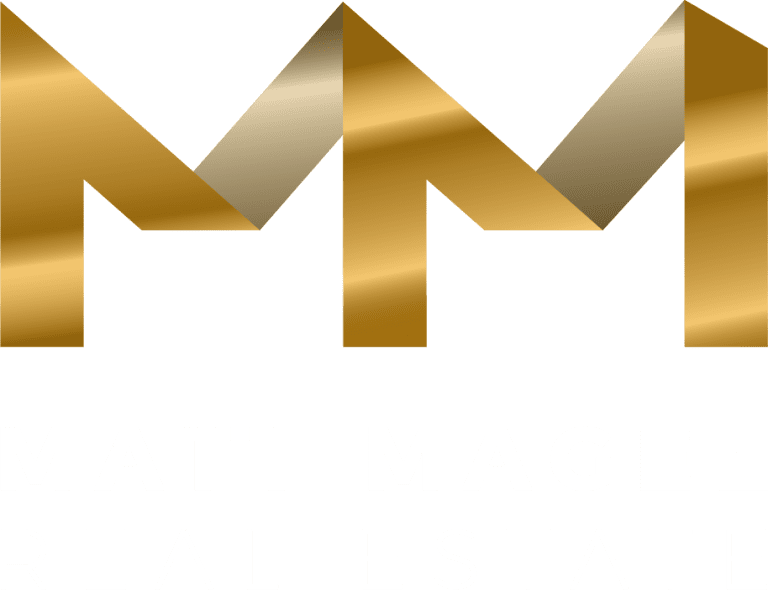 Before I get into the stats, I want to say that there is still an incredible window to get involved in our still busy market!

With a shortage of supply increasing each day, its an extremely good idea to have guidance from an experienced Realtor that understands the market! That way you can enter this competitive market and step forward with confidence! 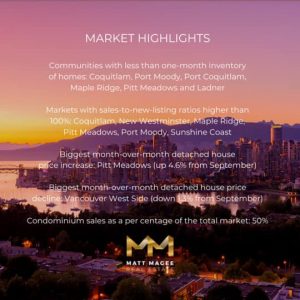 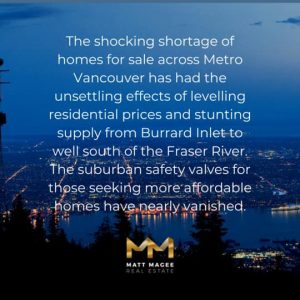 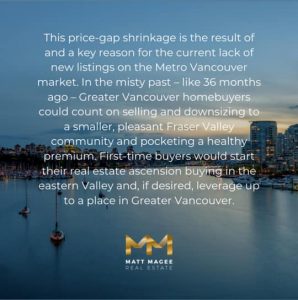 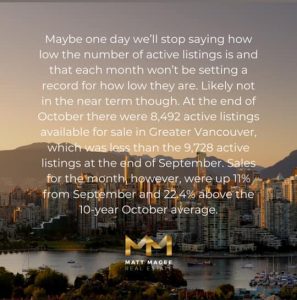 The price gap between the average home price in Greater Vancouver and the eastern Fraser Valley was once a canyon: today it is a creek.

In October 2019, just three years ago, the composite home price difference between Greater Vancouver and the Fraser Valley was $272,500. This October that had narrowed to less than $150,000.

This price-gap shrinkage is the result of and a key reason for the current lack of new listings on the Metro Vancouver market. Only 36 months ago – Greater Vancouver homebuyers could count on selling and downsizing to a smaller, pleasant Fraser Valley community and pocketing a healthy premium. First-time buyers would start their real estate ascension buying in the eastern Valley and, if desired, leverage up to a place in Greater Vancouver.

Now, though, many homeowners are reluctant to list because their exit strategy has been blocked. It is difficult to downsize or upgrade to a place 30 or 60 kilometres away when the home prices are nearly identical or you are you don’t feel you will be able to find a home to purchase. The effect has been devastating.

In October, Greater Vancouver saw 3,455 homes sell but only 4,120 new listings were added to the market. With an 86% sale- to-listings ratio in the month, nearly every listing that came on the market sold – and in some areas like Burnaby, Coquitlam, Port Moody and Tsawwassen, there were more sales in the month than there were new listings.

Will there be any properties for sale on the Metro Vancouver market by the end of 2021? At the rate of decline in the number of active listings, it would seem we could very well run out. For years, there’s been a concentrated, coordinated push by all three levels of government to hold back housing demand. But now we’re left with a complete lack of supply, the lowest levels ever recorded at this time of year.

Maybe one day we’ll stop saying how low the number of active listings is and that each month won’t be setting a record for how low they are. Likely not in the near term though. At the end of October there were 8,492 active listings available for sale in Greater Vancouver, which was less than the 9,728 active listings at the end of September. Sales for the month, however, were up 11% from September and 22.4% above the 10-year October average.

As we have seen for some months, year-over-year condominium apartment sales in October tracked above last year while detached and townhouse markets are showing less sales than in the same month a year ago. 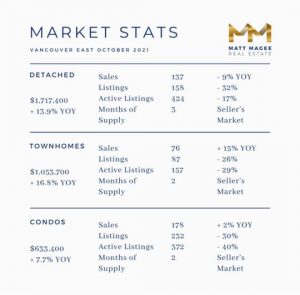 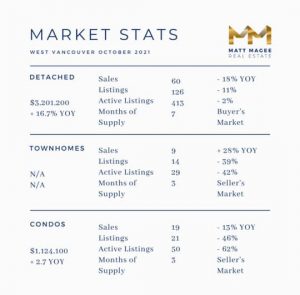 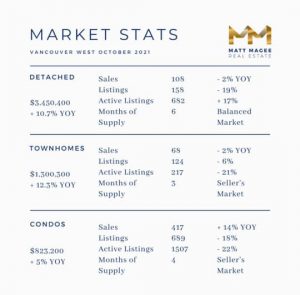 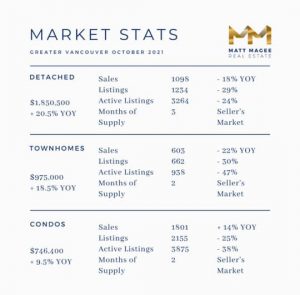 In short, you need the guidance of an experience Realtor to navigate through today’s market whether you are buying or selling.

Contact me if you have questions about the current market of if you would like to buy or sell as home. 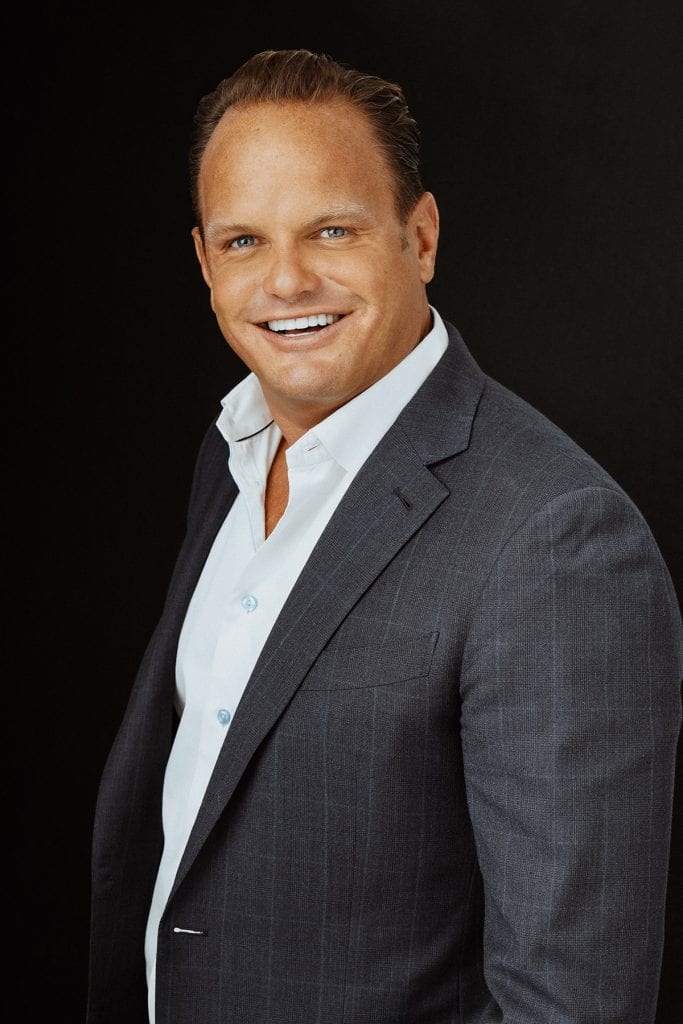 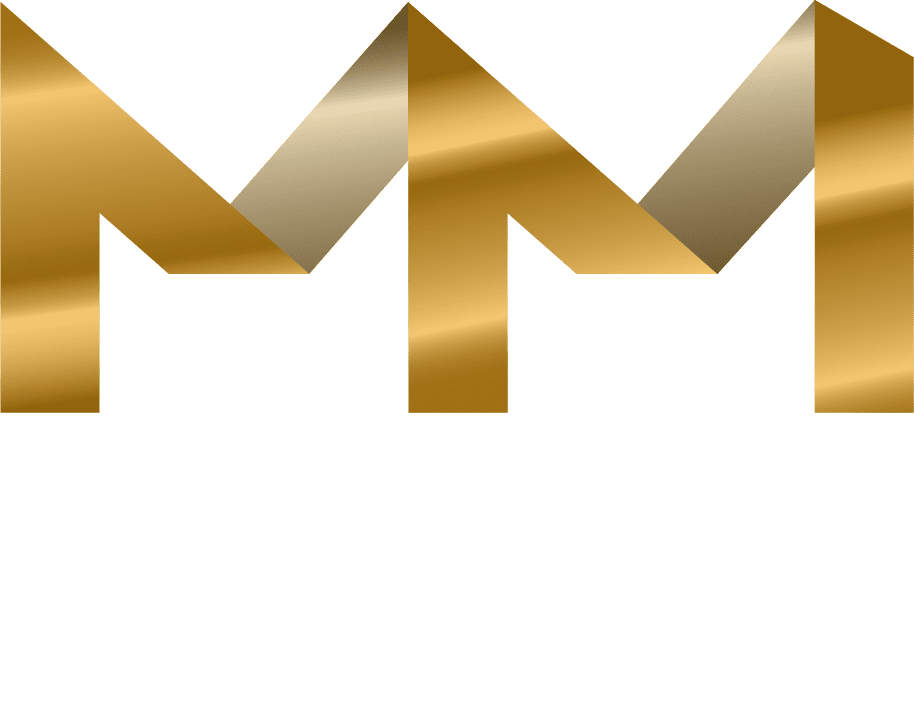